The images presented to us by Philippe Leclerc are imbued with a feeling of peace – I would go so far as to say a feeling of quiescence, in the mystical sense. Vast, mysterious skies. Empty beaches, sporadically haunted by ghosts. Milky waters, as on the first morning of the world. Mysterious ruins, slowly worn away by the sea wind.
Solitude and silence. Dizzyness…
Whereas all had been sound and fury, there is nothing here but velvet light and serene geometry.
Contemplating such photographs, one understands that the truth of things lies beyond what is visible, in those cosmic vibrations that only poets and artists can capture. Having walked the Landing beaches for ten years, Philippe Leclerc has been able to discern their intemporal and universal quality. This is what makes his work moving and fascinating, and why it possibly constitutes the greatest hommage that can be paid to a period of history where our shared destiny was at stake. Overlord forever… 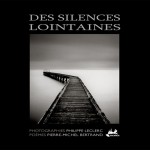 One of them is a photographer, the other a writer. But their worlds are much the same. And they share the same attachment to their region.
From their encounter arose “des Silences Lointaines”, a four-handed work, where the sensitivity of each serves a common expression.
Here words do not exactly describe pictures and pictures do not clearly illustrate words.  But making the most of their mutual resonances, the two art forms come into harmony, into symbiosis one might say; they sublimate each other, creating a poetic atmosphere conductive to reverie.
The book is designed as an initiatory journey, punctuated by twelve stops. A meditation on time, on the absolute, on destiny… But the traditional questioning “Who are we? Where do we come from? Where are we going?” takes on a singular beauty. And the sentiment which arises is that beauty carries in itself a form of answer.
Both authors drew their inspiration in the landscapes of Lower-Normandy. Not a picture postcard version of Normandy, with conventional charm, but sublimated, sensuous and mysterious, sometimes tinted with melancholy, and with something of a marmoreal purity.